Today I continue with the story of our recent journey on the tracks and trails of my newly released book, The Scourge of the Kaiserbird.

Once again we had to stop at Bethanien, one of the central locations, not only in my book, but also in Namibian colonial history. The first challenge as an author was to decide on the spelling of the place name. A direct translation of the Afrikaans Bethanie, as spelled on the official sign welcoming you to the little village, or Bethanië, as in the Bible, would have been Bethany, but that just did not seem right. I decided to use Bethanien, the old German spelling. It added some flavour and emphasis to the story.

Bethanien was and still is the seat of the Fredericks dynasty of the !Aman tribe. The most recent leader, Dawid Fredericks, passed away on 12 January this year at the age of 85. I visited him last year and recorded a few video images of him talking about the Nama war of 1904-1908, a central theme in the book.

At the time it struck me that he was most probably the last living person who had personally talked with a survivor of the war. Captain Fredericks was one of the two nominated people who are engaged in a 30 billion dollar law suit in the USA against Germany for reparation for war crimes.

Two of the oldest buildings in Namibia are located in Bethanien, one the house of the missionary Hinrich Schmelen, and the other the house of Josef Fredericks the second who in 1883 unknowingly sold most of Namaland for a pittance, in a crooked transaction deliberately designed by Heinrich Vogelsang and Adolph Lüderitz. Today the Fredericks house is a national monument. 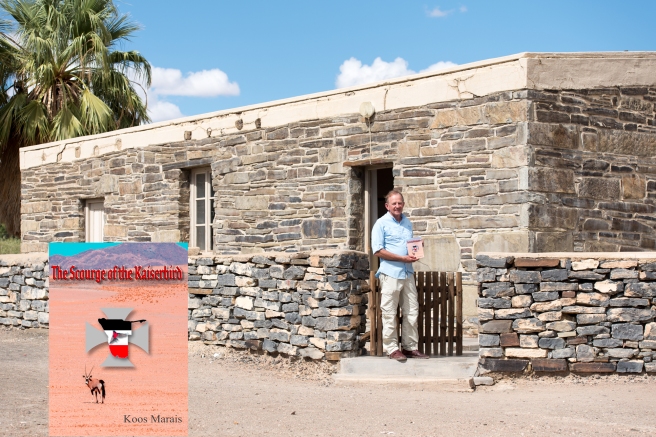 Bethanien is a symbol of many things, of injustice, greed, exploitation and even desperation, but to me it will always be a special place, one where I have learnt how complicated life and relationships can be. Things are never simple. One can argue for both sides of the argument without ever coming to a conclusion. Was it a good thing that the missionaries came here? Was that not the reason they lost their land? Or would they all have perished in internecine wars and battles, like the Afrikaners, the descendants of Klaas, Jager and Jonker?

For the moment I have to side with the contention that the work of the missionaries is not complete. Their work must be carried out to its logical conclusion, in practice and reality and not in theory. Something must be done to bring hope, vision, education, training and a positive future to the people of Bethanien.

My personal dream is for tourism to be developed in this area. It has worked in so many other areas of Namibia, but why is there no progress in Bethanien? Why has nobody put up a guest house, hotel or establishment in the traditional way of the Nama, in reed huts (//haru-oms)? Why are there no organised tours with enthusiastic guides? Why is there no restaurant offering traditional fare?

“The Scourge of the Kaiserbird,” originally published in Afrikaans as “Die Keiservoël Oor Namaland,” will be available from all leading bookstores in Namibia, through Namibian Book Market, and in South Africa from Upper Case, formerly Graffiti, in Menlyn Maine. Copies can also be ordered from bestellings@kaiserbird.com